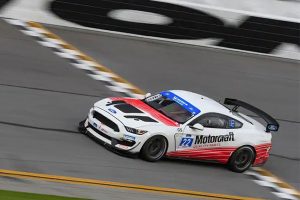 DEARBORN, MI – January 9, 2020 – No, Hailie Deegan conceded with a wide grin, she never expected that her competitive debut on the famous Daytona International Speedway high banks would come in a sports car.

But judging by the smiles and ease she showed Saturday afternoon speaking with reporters at Daytona between Roar Before the Rolex 24 At Daytona practice sessions, she’s eager and mentally prepared for her IMSA Michelin Pilot Challenge race debut at the grand track on Jan. 24. The in-car skills and sports car initiation is coming together too, she said.

“I never thought I’d race a road course especially at Daytona, that was new for me,’’ Deegan said. “I always thought my first time at Daytona would be in an ARCA car but I’m happy to be here on the road course.’’

Deegan‘s ARCA Menards Series season debut at Daytona will follow the Rolex 24 race weekend and comes only weeks after the 18-year old Californian was formally introduced as a Ford Performance development driver. She will co-drive a Ford Mustang GT4 with NASCAR Xfinity Series frontrunner Chase Briscoe in the IMSA Michelin Pilot Challenge race at Daytona later this month.

In February, Deegan will compete in the season-opening ARCA Menards Series race that essentially opens Daytona Speedweeks – the green flag to a much-anticipated full season of stock car racing. All three of these young NASCAR stars say they are grateful for the chance to begin their season early, confident that the extra laps will only help their skillset.

“I’m really excited just to gain experience in these new cars,’’ Deegan said. “Just everything’s new. A fresh start. It’s waiting to get planned out, meeting new people, new faces, new relationships. I’m excited to grow the relationships in the Ford family and everyone that’s a part of it.

“One thing I haven’t really touched on in my career is road courses, pavement road course type stuff. Coming here and filling that base of what I’m missing as a driver as a hole is definitely going to help me be all around as a driver.

“I feel what makes a good driver is a driver that’s not just good at ovals or road courses they are good at everything and have that skill set. I think if I can just keep getting better skill sets to bring to my career, it will help even more.’’